The 2016 CityU Workshop on Computational Approaches to Big Data in the Social Sciences and Humanities (CityU CSS 2016), organized by Web Mining Lab of the Department with support from the Knowledge Transfer Earmarked Fund of the Hong Kong University Grants Committee, has drawn enthusiastic responses from social scientists, graduate students and industry practitioners in Hong Kong and around the world. The targeted seats, initially set to 40 but then doubled to 80, have quickly filled up. One-third of the registered participants come within CityU, another one-third from other universities, commercial firms and non-profit organizations in Hong Kong, and still one-third from Macau, the U. S., mainland China, Singapore, and elsewhere.

Profile of Attendants to CityU CSS 2016 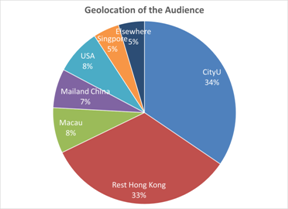 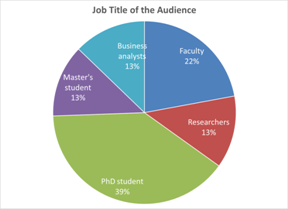 The Workshop will be held on 6 June in Run Run Shaw Creative Media Centre, M5050. Six speakers from sociology, political science, business studies, computer science, and mathematics in the U. S., Britain, France, Australia, and mainland China will give talks on cutting-edge issues in computational social science, including scraping social network data, processing text data, visual analyzing social media user behavior, modeling geolocation data, conducting online experiments, and quantifying human history. The presentations will be followed up by dialogues between the speakers and a team of six moderators consisting of faculty members from the Department or doctoral graduates of Web Mining Lab. Click to see details of the program.